Delta 8 THC is the new THC

We simply know Delta 9 THC ( Δ9 Tetrahyrdocannabinol) as “THC” but there is a Delta 8 THC and it’s kicking up a whole lot of attention. What is Delta 8 THC, how is it different from Delta 9 THC and why should everyone care?

In this article we’re going to talk about some science behind what it does, its legality and what the differences between the two compounds are.

What is Delta 8 THC?

While other cannabinoids like CBD and CBG may improve your mood, don’t confuse these with producing a high. The scientific community is very specific in labeling cannabinoids psychoactive and CBD is just not one of them.

Most cannabis flowers have less than 1% Delta-8-THC naturally.

You don’t have to be a chemist to see that these two are fundamentally identical. There is one very small difference in the molecule.

What this means in practical terms is that you have a cannabinoid that may have medical or wellness benefits as well as recreational benefits. Delta 9 THC turns into Delta 8 THC when it ages. So, it’s settled into a more stable state and the shelf life is longer. This has good implications for pharmaceutical use (if there ever is any) and users at home for cost benefit

Besides creating a mild high, or intoxication, D8 was shown to relieve pain much like Delta 9 THC does. The National Cancer Institute states that Delta 8 THC has anti-nausea, anti-anxiety, appetite-stimulating, pain relieving, and neuroprotective properties. This research has largely been done on animals, unlike CBD which has a significant amount of human trials already. This compound is still up-and-coming compared to where CBD is at the moment.

Contrary to popular belief, standard urinalysis drug tests do not detect THC (Delta-8 or Delta-9). They look for its metabolite, the breakdown of Delta 9 THC that shows up after your liver gets a hold of it. Specifically, it tests for THC-COOH. When this metabolite shows up on a drug screening, it means there was THC in your system at some point in the last 60 days or less.

Why do drug tests look for the presence of Delta 9 THC?

Cannabis barely produces Delta 8 THC. It’s only found in large concentrations when it’s extracted from the flowers of cannabis plants. Since Delta 9 THC is the prevalent compound that’s producing the high, that’s what drug tests are looking for.

Does this mean you can’t test positive on a drug test from Delta 8 THC?

Not necessarily. You would almost guarantee a failed urinalysis, but whether or not you’d fail the confirmatory test (where they send your urine off to a lab with high tech diagnostics) is up for debate. It’s possible that since Delta 8 is under-utilized and relatively unknown compared to Delta 9, that the testing done to confirm your initial urinalysis would miss it entirely. It’s complicated, but basically no one produces the chemical markers that are required to confirm Delta 8 THC. Because who’s taking large quantities of Delta 8? How did they get it? It’s not popular so it’s overlooked. Don’t go thinking you can take a drug test and pass with flying colors, the truth is it’s unproven. 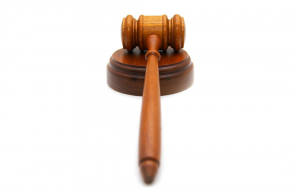 Well, the extracts from hemp plants are in fact legal on a federal level. But, the extracts from marijuana are illegal. So, if you wanted to get technical: it would depend on which plant you extracted it from. But, how do you prove that?

But, let’s say you did extract a large amount of Delta 8 THC and let’s say you extracted it from a hemp plant. The law states that extracts cant have more than 0.3% THC by weight. Does this include Delta 8 THC or did they just mean all THC? The law isn’t exactly clear. What is clear is that police all over the country would not be able to tell the difference between a Delta 8 and a Delta 9 product with their low-tech roadside drug test kits. Odds are you’d be getting a court date if you were found with a large amount of Delta 8 THC and an officer tested it with a roadside drug test kit.

Since this compound is unpopular and not well-known, there haven’t been incentives or a need to test it on humans. Virtually all testing has been performed on animals.

That being said, the animal trials point to a need to test it on humans because the conclusions were that it holds promise for potential medical benefits, not just recreational benefits.

What we do know is that it binds to CB1 receptors in your brain. Delta 9 does this and it increases levels of hormones that allow for feelings of sedation and intoxication. But it also relieves pain. CB1 receptors are potent analgesics and have been very effective for pain management in the past. And studies have recently shown that Delta 8 is effective at managing pain.

The bottom line on Delta 8 THC

The slightly-aged version of Delta 9 THC (what we’ve always called just plain “THC”) is an up-and-comer in the world of cannabis. It’s gaining attention for its less-potent high and potential medical benefits. It will probably cause a failed urinalysis drug test but it may not cause a failed confirmatory test (in a lab with high tech equipment).

It has potential medical benefits for relief from pain and nausea and has even gained attention from the National Cancer Institute for these reasons.

The legality is tricky. While it is legal if it’s derived from a hemp plant (since hemp and its extracts are legal at the federal level), it’s not legal if you extract it from marijuana. But, good luck proving which plant you got it from when you’re explaining why your cannabis product failed a roadside drug test from a law enforcement officer.

While the research has been done mostly on animals, its shown that the door for humans needs to open up since it has so much promise for more medical benefits than recreational benefits.

Will Delta 8 THC make you high?

Yes, Delta 8 is psychoactive and will cause an intoxicating high. But, it’s less potent than Delta 9 THC which is more prevalent in cannabis plants

If you extracted it from a hemp plant, yes. If it’s extracted from a marijuana plant, then no. This would be difficult to prove, but hemp and all of its extracts are legal at a federal level as long as they have less than 0.3% THC by weight.

Delta 9 THC is very prevalent in cannabis plants. Most cannabis flowers have less than 1% Delta 8 THC. They both produce a high but Delta 8 is a less potent high than Delta 9. Delta 8 has a legal loophole that Delta 9 does not (Depending on which lawyer you ask). There is a potential for medical benefits but the studies are all on animals and they’re preliminary.

What is Delta 8 THC?

In short, it’s a cannabinoid like CBD or THC. But, what we call “THC” is actually Delta 9 THC and it is slightly different from Delta 8 THC. Both in its effects and its legality.