The difference between full spectrum CBD, broad spectrum CBD and CBD isolate is all in how the product is made. Basically, CBD oil is either made from the whole plant, or it’s filtered so only the CBD molecule is left as a powder. This Isolated CBD can then be placed in an oil or edible by itself or with other terpenes (to create isolate or broad spectrum). When you consume full spectrum CBD you’re consuming the full spectrum of compounds found in the hemp plant. These compounds (over 100 known) are cannabinoids, terpenes and flavonoids.

Is Full Spectrum much different from isolate?

Well, as incredible of a compound cannabidiol (CBD) is by itself, the other compounds are also very useful. The research that’s been done on these lesser-known compounds is not nearly as prominent as CBD, but it’s rapidly increasing due to an increase CBD’s popularity. We all want to know everything about the hemp plant that CBD comes from, including all of its terpenes and other cannabinoids.

What are these compounds in “The Spectrum”

Full spectrum means you’re getting “everything” in the spectrum of the hemp plant.

But, that’s not entirely true.

You’re getting everything that was in the hemp flower when it was harvested, yes. But it’s impossible for a hemp flower to produce every single cannabinoid, terpene and flavonoid known to man in a single flower. Not gonna happen. Climate, geography and the growth cycle of the plant all affect which compounds you’re getting. Farmers have gotten very good at knowing how to optimize their crop for specific cannabinoids but, in general, you can’t just get the full spectrum of the cannabis plant in every flower.

What are these “other compounds” in the hemp plant?

Terpenes– give a plant its smell 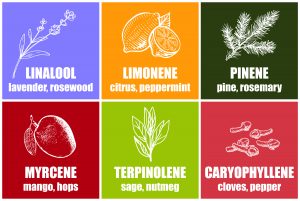 Flavonoids– give a plant its color

As of 2020 what we know about these other compounds is still relatively little. But, already there is a lot of promise with their potential. The terpene myrcene for example, is a potent analgesic that releases naturally occurring opiods (the body’s natural painkiller). In other words, it works as an opiate would, except it doesn’t create an intoxicating “high” or even addiction. And, without any opioid stimulation in the brainstem, you can’t have an overdose like a narcotic would cause. We haven’t even scratched the surface on the potential future applications of just this one terpene yet. And there are other terpenes that are researched to show properties of anti-inflammation, anti-anxiety, anti-depression and promote healthy sleep cycles.

Most  of the effects of all these different compounds are similar. A phenomenon called the entourage effect creates a more potent action of CBD in the body. In other words, CBD with all of its friends is stronger than CBD by itself.

What is CBD isolate?

With the extraction technology we have in 2020, it’s safe to take out one specific compound of the hemp plant (like CBD) and leave all the others out of the final product. If you isolate CBD and place it in an oil, an edible or a vape, you’ve just created CBD isolate. It means that there are no other parts of the hemp flower in that product except CBD.

Why would someone not want a full spectrum product? Isn’t it superior to CBD isolate?

Given the choice between the two, full spectrum is researched to be more effective for things like pain and achieving feelings of relaxation/sedation or sleepiness. However, since full spectrum products contain all of the ingredients of the hemp plant, THC is included. The maximum amount of THC allowed in any CBD product within the USA is 0.3% by weight. It’s a trace amount, not enough to cause any feelings of intoxication or “high”. Just like “non-alcoholic” beer still has a trace amount of alcohol yet it doesn’t get you drunk.

However, even this small amount of THC in full spectrum CBD is enough to cause you to fail a drug test. This means that for firefighters, first responders, truck drivers and anyone else that takes random drug tests, taking full spectrum CBD could cost them their jobs.

Broad Spectrum: The best of both worlds?

If the entourage effect is the standard desired effect everyone wants, but you still need to pass a drug test, isn’t there a middle ground?

Broad spectrum products take CBD isolate and place it into your oil with other terpenes. Can you have other cannabinoids besides CBD in broad spectrum? Maybe, but it’s too risky. The extraction process is very meticulous to be able to remove CBD from THC since they’re so close together on a molecular level. This means that the more cannabinoids you have in your product, the more likely it is that you’ll have THC in there.

If you’re trying to pass a drug test, this is a deal breaker.

Even still, you must check lab tests to ensure that the manufacturer didn’t use a sub-par extraction method and allow THC into their product. Evaluating lab tests will also show that your product is in fact a broad spectrum product and not just CBD isolate. Lab tests can display the exact amounts of other compounds like cannabinoids and terpenes, so go and see for yourself! 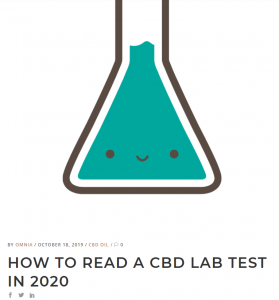 The bottom line on Full Spectrum vs Isolate vs Broad Spectrum

CBD by itself has benefits. Research shows its potential for rem sleep, balancing hormones for mood support as well as its effects on inflammation.

But, full spectrum does contain all of those other cannabinoids and terpenes. Especially those that are researched for pain relief. You’re just not going to pass a drug test with full spectrum since it has Delta 8 and/or Delta 9 THC.

Broad spectrum is the “best of both worlds” if you will. CBD with a few terpenes and no THC. This means that you’ll receive some of that entourage effect and still pass a drug test. Buyer beware: if broad spectrum is not carefully extracted it can contain THC. Check lab tests to ensure that you’re receiving a truly THC free product with those other compounds you’re looking for!

See: How to read a lab test

The terms are not interchangeable. Full spectrum is the “whole plant” in your CBD oil, vape, edible, etc. This means they every naturally occurring compound (including THC) the plant gives you when it’s harvested. Broad spectrum tries to be the best of both worlds, where it contains other cannabinoids and terpenes but has no THC. Low quality extraction can allow for THC to still be present, buyer beware.

While CBD isolate has its benefits (you can pass a drug test with it), full spectrum contains more pain-killing cannabinoids and terpenes like CBG and myrcene. However, if you still want to pass a drug test and you’re also looking for these terpenes you can choose broad spectrum. It’s isolate with the other “good stuff” added and no THC!

Full Spectrum vs Isolate for Anxiety

We have to understand what causes anxiety (which isn’t easy). But, many times it’s an imbalance of hormones, serotonin is the biggest suspect. CBD by itself has been shown in many studies to raise levels of serotonin. Full spectrum could have compounds like myrcene that give the sleepy/sedative feeling and would allow a feeling of calmness as well. If you don’t need to pass a drug test, take full spectrum.

What’s The Difference Between Full Spectrum CBD and CBD Isolate?